Former users of the antipsychotic drug Abilify are pursuing legal claims against Bristol-Myers Squibb and Otsuka Pharmaceutical Company, alleging that the prescription drug caused them to experience compulsive behaviors like pathological gambling, binge eating, and hypersexuality.

If you took Abilify in the past, and you have since experienced side effects like overeating or compulsive gambling that results in crippling debt, severe emotional injuries, and loss of quality of life, consult a reputable Abilify attorney today for legal help. With a knowledgeable product liability lawyer on your side, you can protect your legal rights and pursue the financial compensation you deserve for your injuries, medical expenses, and pain and suffering.

Abilify (aripiprazole) is an atypical antipsychotic medication commonly prescribed to treat major depression, bipolar disorder or schizophrenia, and the drug is also sometimes used as a combination treatment with antidepressant therapy, or as a treatment for other mental illnesses. First approved by the U.S. Food and Drug Administration (FDA) in 2002, Abilify has become one of the most widely-prescribed medications in the world, bringing in roughly $6.8 billion worldwide for Otsuka Pharmaceutical Company from April 2013 to March 2014. Second-generation antipsychotic drugs like Abilify work differently than older drugs like Haldol and Thorazine, which target only dopamine receptors and are associated with a higher risk of neurologic side effects. Abilify and other newer antipsychotics work on both dopamine and serotonin, and are marketed as being associated with fewer movement disorders, like tardive dyskinesia.

Reported Side Effects of Abilify

Despite its widespread use, Abilify carries a potential risk of serious and debilitating side effects, including a host of compulsive behaviors. Among the complications allegedly linked to Abilify treatment are:

When a person experiences a pathological symptom, a brain irregularity makes it extremely difficult for them to stop without assistance, and compulsive gamblers have a difficult time walking away from blackjack tables, poker tournaments and betting on sports games. The compulsive gambling side effect of Abilify drives users to gamble by any means necessary, even if they have to gamble away their life savings, borrow money to gamble, or gamble on credit.

How an Abilify Attorney Can Help

When it comes to pursuing compensation for injuries related to Abilify treatment, it can be extremely difficult to recover damages from pharmaceutical giants like Bristol-Myers Squibb and Otsuka Pharmaceutical Company, especially with the teams of lawyers Big Pharma has protecting their interests. However, by hiring a qualified Abilify attorney who has years of experience representing patients who have been injured by prescription and over-the-counter medications, you can significantly improve your chances of winning your case and receiving the compensation you deserve for your injuries, medical bills and emotional trauma.

Link Between Abilify and Compulsive Behavior

The alleged link between Abilify treatment and compulsive behaviors is not new. One of the first case studies involving pathological side effects of Abilify was published in 2008, involving a patient who developed symptoms of sex addiction after taking the antipsychotic drug for schizophrenia, and by 2014, dozens of reports of compulsive gambling problems associated with Ablify had been reported to the FDA. In May 2016, the FDA issued a drug safety communication urging patients and their doctors to watch out for signs of “uncontrollable urges to gamble, binge eat, shop and have sex” while using aripiprazole-based medications like Abilify.

In one case study published in the Australian & New Zealand Journal of Psychology in 2010, one woman took Abilify for schizophrenia and gambled away thousands of dollars and gained nearly 20 pounds in six months, despite having no prior history of such behaviors. “I just wanted to keep putting money in. It was an urgency,” she told the researchers. “I seemed to lose all reason. I also could not say no to food, especially sweets and cakes.” In 2011, another case study identified evidence of pathological gambling side effects among Abilify users with schizophrenia who had no previous history of such habits prior to taking the medication.

In other studies conducted in recent years, including one published in JAMA Internal Medicine in December 2014, researchers have identified impulsive control disorders as a potential side effect of aripiprazole, and some have reported that once Abilify treatment was discontinued, the symptoms subsided. As a result of these Abilify findings over the years, researchers involved in a 2011 study published in Current Drug Safety recommended “consideration with increased attention for the appearance of pathological gambling symptoms among patients on aripiprazole.”

The potential side effects of Abilify treatment have led to product liability lawsuits being filed against Bristol-Myers Squibb and Otsuka Pharmaceutical Company, on behalf of patients who have experienced unexpected urges while using the antipsychotic drug, like suicidal thoughts, binge eating and compulsive gambling resulting in crippling debt. While compulsive gambling is not a side effect that typically causes physical harm, it can cause severe psychological distress and ruin lives. Some patients who took Abilify for schizophrenia and other mental illnesses have lost enormous amounts of money and experienced extreme financial hardship as a result. All of the Abilify lawsuits involve similar allegations that Bristol-Myers Squibb and Otsuka failed to warn consumers and the medical community about the potential for the antipsychotic drug to cause serious side effects in users.

A number of Abilify lawsuits have already been brought against Bristol-Myers Squibb and Otsuka Pharmaceutical Company, including one claim brought in January 2016, by a man who alleged that the antipsychotic drug caused him to develop a compulsive gambling habit that cost him more than $75,000. This isn’t the first time Bristol-Myers Squibb has faced lawsuits over Abilify though. In 2007, the pharmaceutical company agreed to pay more than $515 million to resolve federal charges of illegal marketing, including knowingly promoting the off-label use of Abilify for pediatric uses and to treat dementia-related psychosis, neither of which are have been approved by the FDA. Former Abilify users who file legal claims against Bristol-Myers Squibb and Otsuka Pharmaceutical Company may be able to recover damages for the following:

Nearly one million Americans every year are prescribed Abilify to treat mental illnesses like bipolar disorder, schizophrenia and major depression, and while the antipsychotic drug is helpful in controlling the symptoms of these conditions, it comes with serious side effects that can have a lasting negative impact on users’ lives. If you believe you have been adversely affected by side effects of Abilify, like pathological gambling, binge eating or another compulsive behavior, contact an experienced Abilify attorney to discuss your legal options. You may be entitled to financial compensation for your injuries and medical bills, which you can pursue by filing an Abilify lawsuit against Otsuka Pharmaceutical Company and Bristol-Myers Squibb. 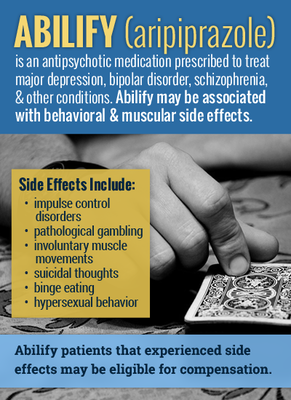