When Intuitive Surgical’s da Vinci Surgical System was approved by the U.S. Food and Drug Administration (FDA) in 2000, it was hailed by its manufacturer as a safe and effective option for patients eligible for minimally invasive surgery for problems ranging from prostate cancer to uterine fibroids. A recent series of lawsuits brought against Intuitive Surgical say otherwise.

Lawsuits claim that normal wear and tear of the surgical robot can cause serious injuries to patients, forcing them to undergo the invasive surgery they were trying to avoid in the first place. If you believe you have been harmed by side effects of robotic surgery, contact an experienced product liability lawyer today to explore your possible compensation options.

Alleged Side Effects of Robotic Surgery

The da Vinci Surgical System is a precise remote-control device with four robotic arms that are operated by a surgeon who views the procedure via magnified screen. The surgical robot operates by using an electrical current to cauterize as it cuts through tissue, which some say is the very thing that puts patients at risk for severe injuries. During surgery, microscopic cracks in the protective covers – which insulate some of the robotic instruments, including the casing that holds the scissors attachment – could allow electricity to leak out and inflict burn injuries on patients.

What is most alarming is that burns may occur outside of the magnified view of the surgeon, which means he or she may be unaware of the problem and unknowingly send the patient home with a perforated bowel or another serious complication.

Although Intuitive Surgical continues to deny any risk of injury associated with its surgical robot, a number of studies have examined the potential risk of side effects from the da Vinci Surgical System. One such study, published in the journal Obstetrics and Gynecology, highlights three cases where women suffered burn injuries from cracked robotic instruments.

Another study, that analyzed both robotic and traditional laparoscopic equipment used at the Mayo Clinic in Arizona, reported insulation failure – or cracks – that let the electrical current escape. This occurred in 32% of robotic instruments and 13% of conventional laparoscopic instruments. According to the researchers, “[Laparoscopic procedures] are associated with a high mortality rate because of subsequent intestinal perforation and delayed recognition.”

In 2013, Intuitive Surgical issued an Urgent Medical Device notification to customers, warning that the robot’s Monopolar Curved Scissors (MDS) or “Hot Shears” may develop micro-cracks that could allow electrosurgical energy to leak into tissue. In 2014, the company announced a recall of certain cannulae components, due to a risk that the components may become damaged during use and pose a risk of injury for patients undergoing robotic surgery.

According to allegations raised in da Vinci surgical robot lawsuits, Intuitive Surgical has failed to take proper action to correct the problem with its instruments suffering microscopic cracks after just a few uses, and have not provided doctors and hospitals with adequate warnings about the potential for patients to suffer burn injuries from robotic surgery.

Since the da Vinci Surgical System first entered the market more than a decade ago, it has been used in more than 2,000 hospitals, earning Intuitive Surgical hundreds of millions of dollars. By 2012, the da Vinci robot was being used in nearly 400,000 laparoscopic surgeries each year.

If you underwent laparoscopic surgery with the da Vinci surgical robot, and you have suffered burn injuries or another serious complications as a result, consult a reputable robotic surgery attorney today. You may have grounds to file a product liability lawsuit against Intuitive Surgical, in order to pursue financial compensation for your injuries, medical expenses, pain, and suffering. 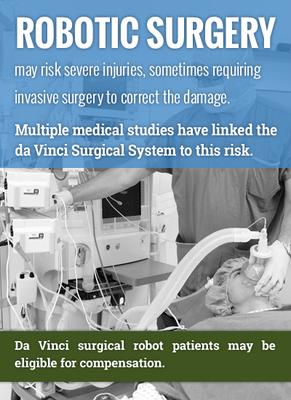